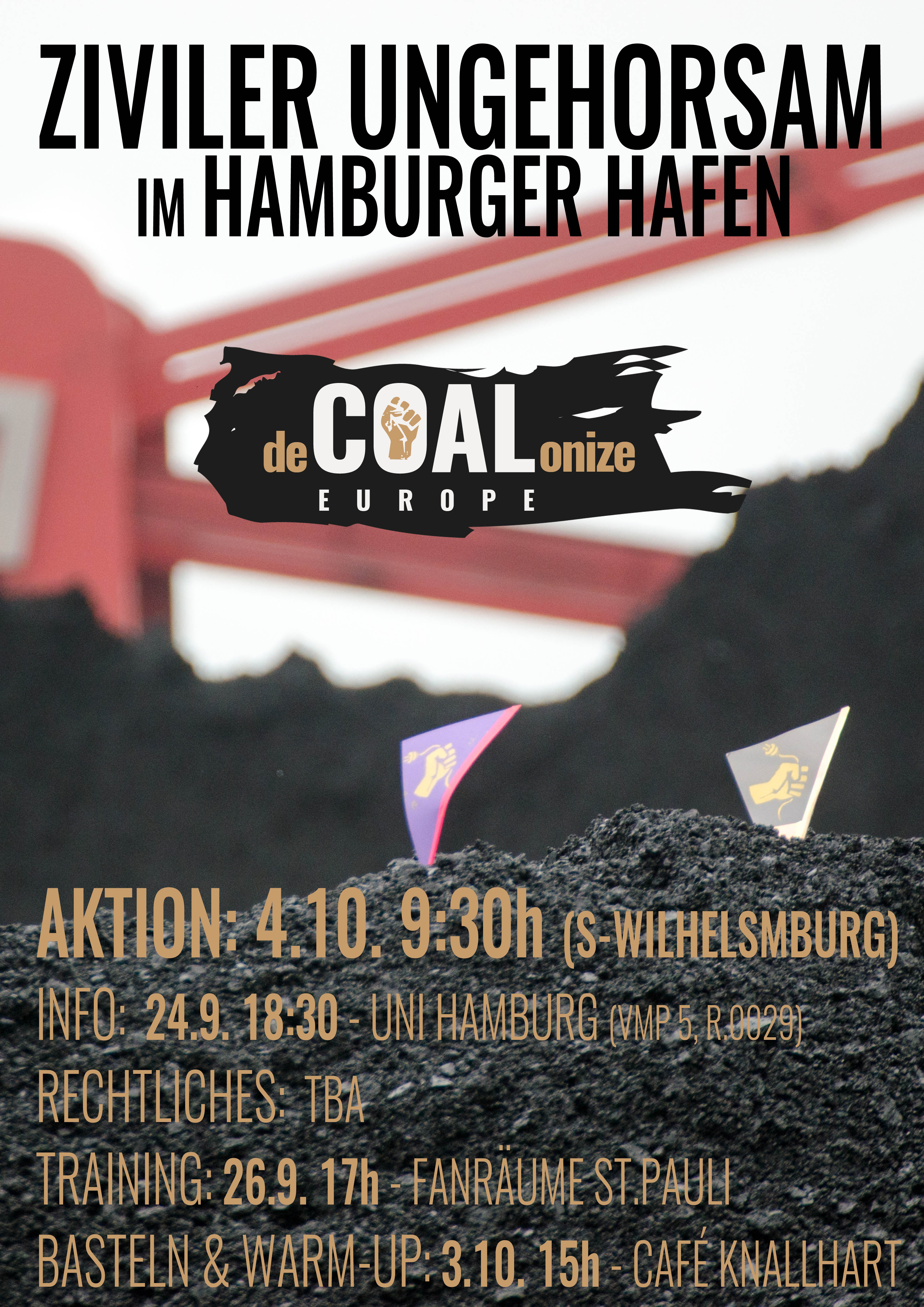 Civil disobedience in the port of Hamburg

As part of the #deCOALonizeEurope days of action, we will go together to the place where climate change is happening: the Port of Hamburg. There, together with hundreds of people, we will stand in the way of the climate disaster and block coal infrastructure. No matter if you are a first time participant or already experienced: you are very welcome.

We want to take care of each other and end the action together on the same day. Bring your peer group and prepare together! Come to our information event and action training!

At 9.30 a.m., a bicycle demonstration by BUND and Fridays for Future will start from the Environment and Energy Authority (S-Bahn Wilhelmsburg) past the Moorburg coal-fired power station and through the Harburg industrial park back to Wilhelmsburg.

We’ll line up there first. That’s why you have to bring your bike! Also warm & rainproof clothes, water for one day and an umbrella should not be missing.

The “Hansaport” in the Port of Hamburg is the largest hard coal seaport in Germany and thus the hub of the global hard coal trade. The hard coal is not only burned in German power plants, but is also used in the steel industry for the automotive industry and the construction of Europe’s largest gas pipeline projects (“Nord Stream 1 & 2”, “Trans-Adria-Pipeline”, “Langeled”).

Port of Hamburg – Gate to the (colonial) world

Trade in hard coal is not a new phenomenon. For hundreds of years, profits have flowed into Hamburg in the form of precious raw materials, while weapons and wars have been exported to the former colonial countries. The port was a logistical and military hub for colonial wars. At that time Hamburg was a colonial metropolis, today Hamburg is a post-colonial metropolis. Today, the port of Hamburg is used not only for coal but also for a number of other transactions such as feed imports, arms exports and nuclear transports. Corporations in Hamburg continue to make massive profits from the exploitation of labour and raw materials in other regions of the world. These transactions cause violent social and ecological conflicts there and further promote global injustice.

In Hamburg, the red-green Senate is currently boasting in the media about Hamburg’s “Coal Exit Act” – from 2030, the city of Hamburg wants to completely dispense with coal firing for heat production. The truth is that we in Hamburg are miles away from an energy transition. Electricity production, which accounts for the majority of CO2 emissions in the Hamburg energy sector, remains unaffected by this bill. 94% of the electricity generated in Hamburg is currently generated from fossil fuels, 85% of it from hard coal. According to the Senate, this is not expected to change in the coming decades. Electricity generation from fossil fuels has even continued to rise undisturbed in Hamburg in recent years, while renewable energies are stagnating. The three hard coal-fired power plants in Hamburg produce around 8.5 million tonnes CO2 per year (Moorburg (6.2), Tiefstack (1.2) and Wedel (1.1)). Moorburg alone causes significantly more CO2 emissions every year than the entire Hamburg transport sector. For all of us, this means a higher level of fine dust pollution and a greater risk of developing respiratory diseases. Children and elderly or sick people are particularly affected.

We demand in Hamburg:

• Moorburg, Wedel and Tiefstack immediately off the grid!

2020 are citizens’ elections in Hamburg. Talking about a coal phase-out and at the same time not pursuing any plans to phase-out power generation from hard coal is a bad attempt at deception. It is foreseeable that there will be a green government participation again. But no party has yet provided serious solutions to the climate crisis, and they cannot be expected from them in the future either. If we are to find adequate and fair answers to the climate crisis, we need more than just a green coat of paint! We need a fundamental change in the way we live and work.

Let us take to the streets together and become active ourselves! 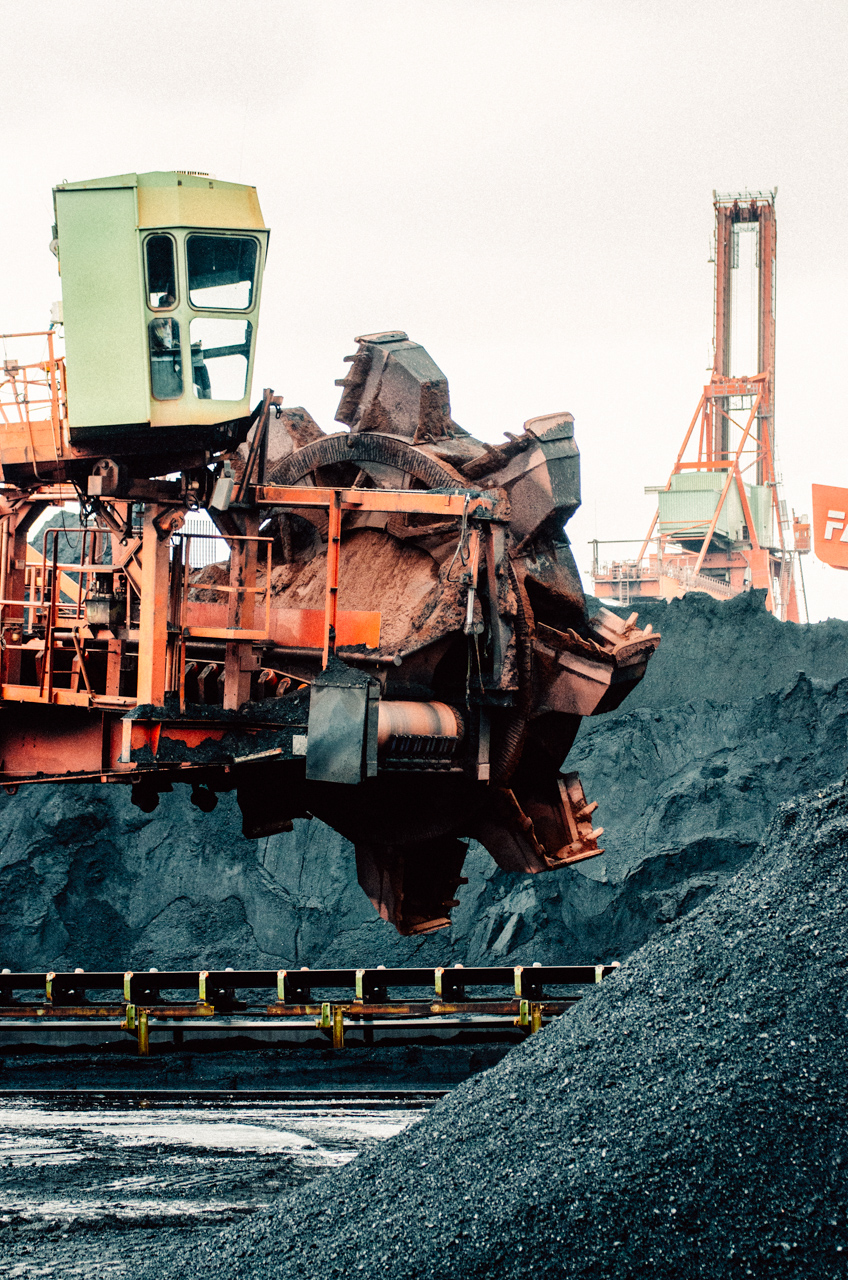 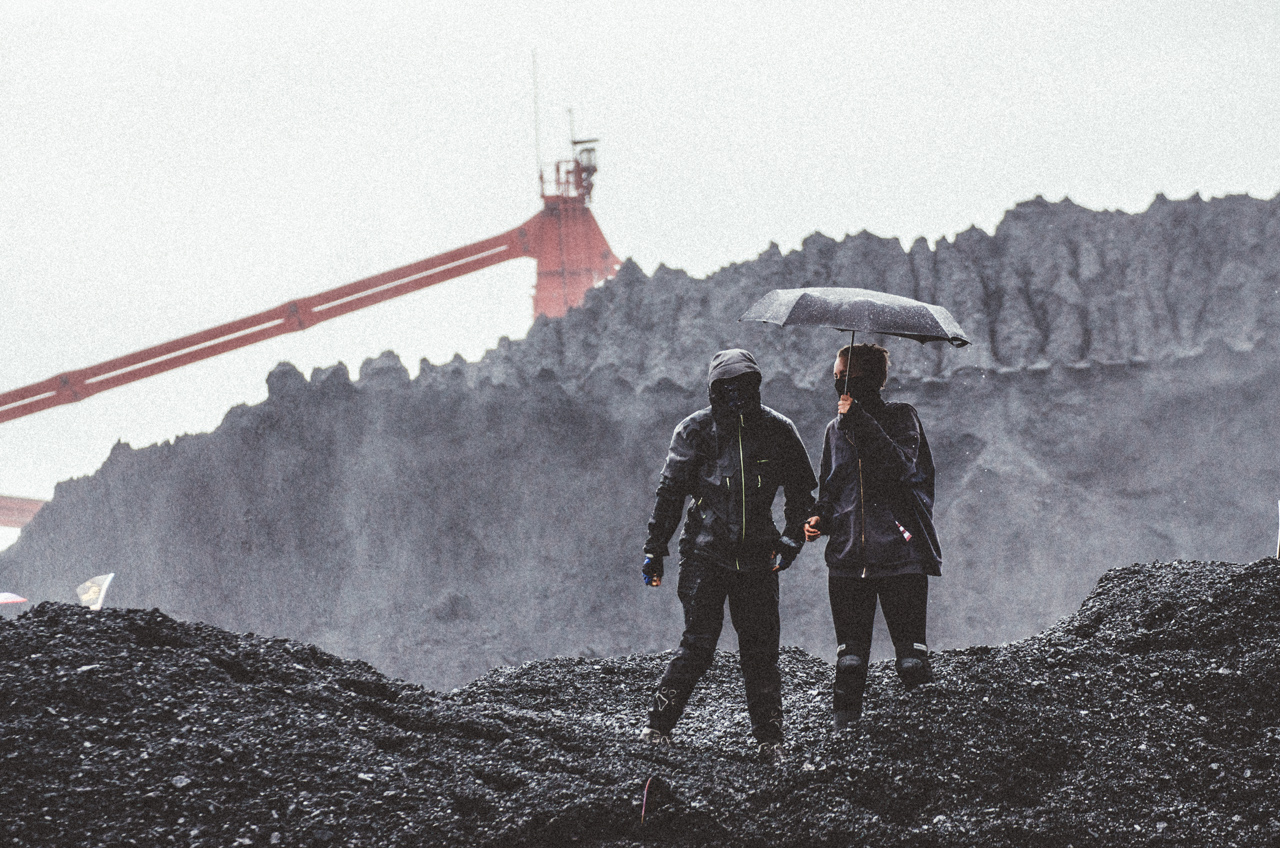 For questions or if you need a place to sleep, please contact

Any cookies that may not be particularly necessary for the website to function and is used specifically to collect user personal data via analytics, ads, other embedded contents are termed as non-necessary cookies. It is mandatory to procure user consent prior to running these cookies on your website.